Together We Can Tackle Child Abuse Campaign – resources for all

The Together, we can tackle child abuse campaign was launched by the Department for Education with the support of local authorities and other partners.

The aim of the campaign is to encourage members of the public to report instances of child abuse and neglect and overcome the barriers that stop people reporting. We all have a role to play in protecting children and young people. Together, we can tackle child abuse.

One concern was that people were unclear on how to spot the signs of child abuse and neglect – so this easy ABC is being promoted by the campaign.

What stops people reporting?
Most people find the decision to report child abuse a difficult one. These fears are understandable, but unfounded.

A third of people who suspect child abuse, do nothing. A number of people do not act on their suspicions because they are worried about being wrong.

The key call-to-action for reporting across the campaign directs people to the website www.gov.uk/tacklechildabuse they can enter their postcode to contact their local council.


Myth: reporting a child/family to ‘social services’ means the child will be removed from their family immediately by social workers
Fact: social workers protect vulnerable children and provide support to families in need of assistance.

Myth: it is only child abuse if there is physical or sexual violence
Fact: nationally in 2014/15 over three quarters of the children on child protection plans were there as a result of neglect or emotional abuse of the remaining children reasons were 10% for physical abuse and 5% for sexual abuse many children and young people are likely to experience more than one type of ab

Myth: people will know it was me who reported them
Fact: when you make report to children’s social care you will be asked for your details but can say if you would prefer they were kept private.

Myth: it is not my job to report child abuse – that’s for teachers or professionals to handle
Fact: keeping children safe is everyone’s responsibility – everyone in the community has an important role to play.

Myth: child abuse doesn’t happen in my neighbourhood – I live in a good area
Fact: whatever their background, age, gender, race or sexuality or wherever they live, any child or young person could be abused or neglected – child abuse and neglect can occur anywhere.

Myth: it is best to wait until you’re absolutely certain you have firm evidence before reporting child abuse
Fact: you don’t have to be absolutely certain about your suspicions; if you have a feeling that something’s not right, talk to your local children’s social care team who can look into it.

Myth: if the child doesn’t tell someone about the abuse taking place it cannot be that serious
Fact: research indicates that children and young people suffering abuse may make multiple attempts to tell someone; however, talking about this is a difficult subject.

Myth: children are just attention seeking when they act up
Fact: changes in behaviour are one of the key signs that a child may be suffering from abuse or neglect.

The most common barriers that stop them asking for help are:

What should you do if you suspect child abuse?


If you suspect child abuse or neglect, you should contact the Manchester Contact Centre on 0161 234 5001 or if a child is in immediate danger the police on 999.


Included with the campaign toolkit is a video and other materials such as posters and leaflets designed to raise awareness among professionals and the wider community about child abuse and the importance of reporting concerns as quickly as possible to ensure children and young people are kept safe.

The content puts the child at the heart of the campaign with a range of emotionally engaging creative content. Free to use for all, the content has been tried and tested with parent groups and experts in the sector.

The aim is that these will: 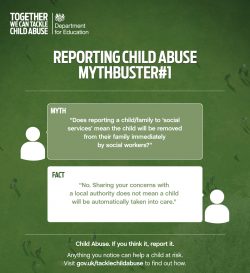 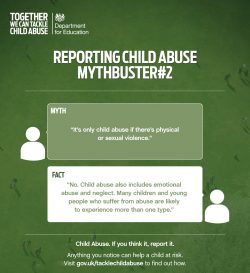 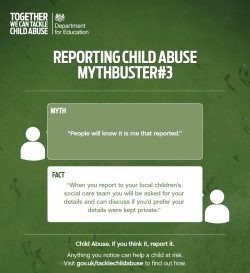 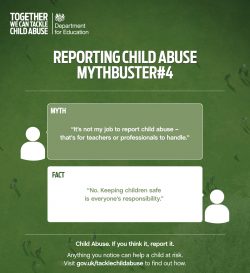 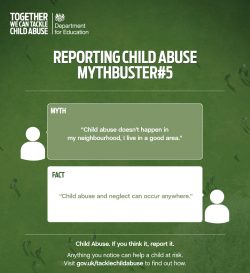 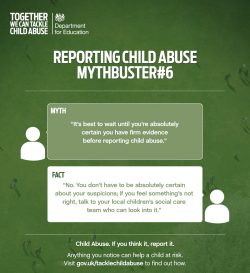 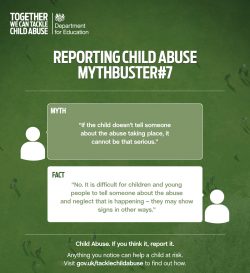 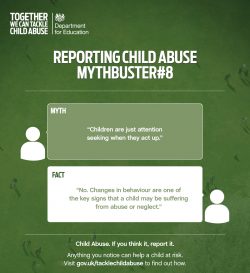 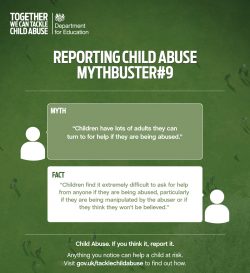 What happens once you have reported supected abuse?

What to do - how to make a report

Use our quick Q+A to find commonly asked questions.

Can’t find what you are looking for?

We try to keep our news feed as up to date as possible and feature items of interest to practitioners and volunteers across our partnership.

Want to keep up to date with all of our latest news, offers and information?