Animal abuse & the link to family violence – advice for practitioners

While many people consider animal abuse and family violence to be two separate issues, studies suggest that they are actually linked.

Although animal abuse protection agencies and social care workers often coordinate with each other to prevent or report various forms of abuse, generally animal abuse and child abuse are considered two separate issues. However, professionals working in these fields will tell you that within families, it is often the same perpetrators involved and the same overarching problems.

In the past couple of decades, official bodies have recognised a link between cruelty to animals, domestic violence and child abuse. While both the NSPCC and the RSPCA have highlighted this troubling link, the two different forms of abuse are still widely often thought of as unconnected.

To spot signs of animal cruelty, which could perhaps lead to an indicator of the abuse of children, practitioners must receive the correct training.

According to The Links Group – an organisation that works to stop violence against people and animals – in child abuse cases, actual or threatened animal abuse is often a way for the abused to silence their victims about the incident.

For example, killing or harming a family pet could be a source of comfort or control for the child victim. In some cases, victims will abuse animals to either protect the animal from worse harm or to displace their hostility towards their abuser.

There are some instances when children are brought up around dog fighting, for example, a problem that is linked to gambling, guns, gangs and drugs. When vulnerable children are exposed to this toxic environment, they can often become desensitised to violence and unable to experience empathy. It is crucial to remember that the emotional impact upon vulnerable children who witness or perpetrate acts of animal cruelty can be both lifelong and devastating.

Prevention
Animal control protection officers, social care workers and anyone working with children or animals must consider that all cases of abuse have the potential to be connected to other forms of violence or dysfunction in the home. In the majority of cases, these types of professionals will be the first responders and first point of contact for a person, animal or family in need of help.

In order to prevent animals and children from being harmed, awareness surrounding these links must be built. This includes encouraging communities and members of the public to take action by giving greater importance to suspected animal abuse, with the knowledge that they could be preventing other forms of violence.

The NSPCC have produced a useful leaflet ‘Understanding the Links‘ which can be found on their website at www.nspcc.org.uk

The course is particularly appropriate to child protection services, health professionals, police officers, teachers and education experts, children’s social care, adult social care and housing authorities. It has been written to provide a basic understanding of what animal abuse is, how to spot the signs, as well as to understand the recognised link between family abuse and animal abuse, and understand what to do if you have suspicions of abuse. 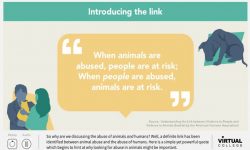 Use our quick Q+A to find commonly asked questions.

Can’t find what you are looking for?

We try to keep our news feed as up to date as possible and feature items of interest to practitioners and volunteers across our partnership.

Want to keep up to date with all of our latest news, offers and information?